What is MT-Script? Easy way to work with MathType equations in InDesign

MT-Script is system of scripts to work with MathType equations in InDesign. MT-Script is ONLY scripts. It doesn't change content of equations. It can do that you can do manually but just a bit quicklier.

For example, can you you export equation from Word manually? Yes, it's very easy by comands from MathType menu in Word.

Can you import equation as EPS- or WMF-file into InDesign? Yes, just press CTRL + D, choose file and place it into text.

Can you align equation? Yes. Choose instrument Selection in InDesign (black arrow), click on equation and hold mouse button pressed move up or down.

All described above MT-Script can make instead of you.

More over MT-Script allows to format equations from selected text (frame) or in whole publication. For this purpose it starts functions from MathType API to change parameters in all equations in selection. So it doesn't change equation, it doesn't create EPS or WMF. It only forces MathType to do it for you. And after MathType has recreated EPS or WMF MT-Script reimport it into publication and align equation according to its height and baseline position.

So, you have problems with characters in equations then you must check whether fonts (used in equations) are registered in MathType with apropriate encoding.

MT-Script can be installed automatically by installer Setup_MTScript.exe, or manually by copying MT-Script into appropriate folder. Read more here and here. 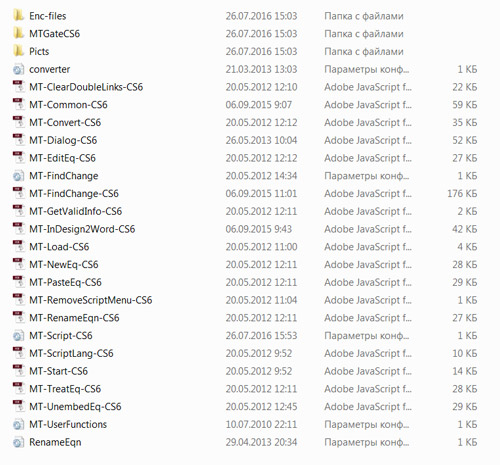 An archive MT-Script-CS6.zip (for using in InDesign CS6 for example) contains folder MT-Script-CS6 with the next files: